In your prototypes last week, we saw that all of our games are going to involve physical interactions between objects. At the end of our last lab we were manually positioning our players, which meant that we could walk through walls. Also, the movement was jerky. In today’s lab, we look at how we can use the physics engine, smooth out the movement, and launch projectiles from the avatar.

This is the controller that we assembed in our last lab exercise. 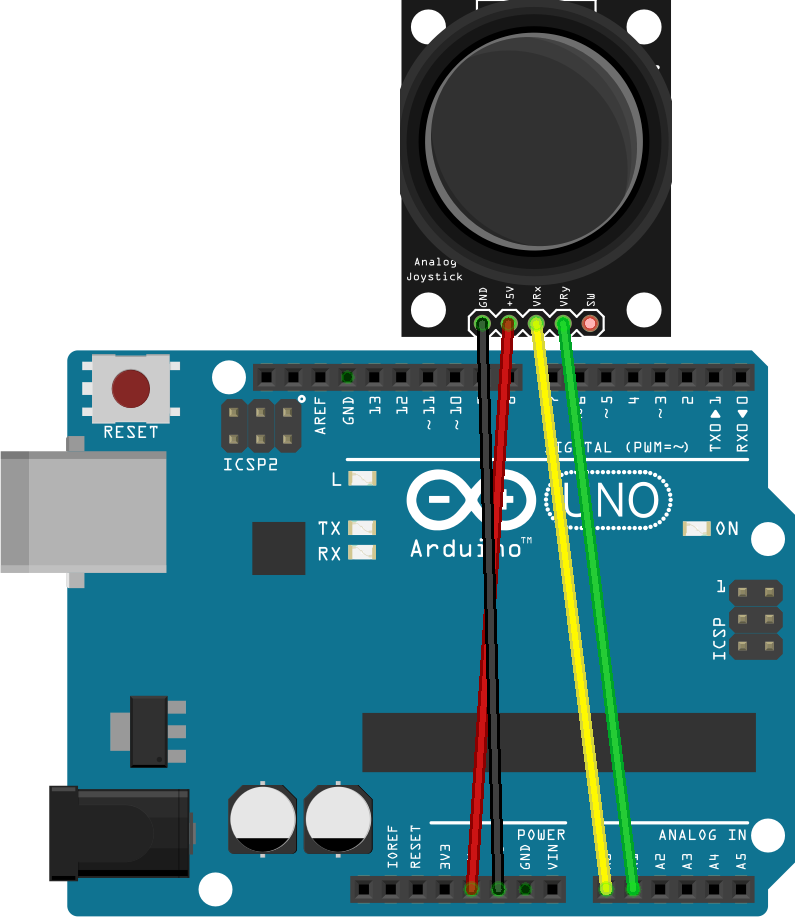 We assembled the controller as follows:

We connected with the controller in Unity with code that looked something like this in Update:

Get your project back to this state if it’s not already there. Comment out OnTriggerEnter2D.

Our first step is to let Unity’s physics engine control the position of the player. Physics will do a better job of producing realistic motion than us. Complete these checkpoints:

Does this feel any smoother? Probably not. We are still instantaneously setting the velocity, which leads to discontinuities.

When you test the game now, do you see how the movement ramps up and down? For instance, after you let go of the joystick, the player keeps moving for a few frames. But the motion’s still jerky.

To get rid of jerks completely, we need to read faster from the serial port. Let’s switch up our reading algorithm from reading one line at a time to reading as much as data as is available and skipping directly to the most recent [x y] message. Alter the reading algorithm to this mix of C# and pseudocode:

This algorithm skips over all the old payloads from the controller.

Additionally, tweak the serial port to timeout nearly immediately if there are no bytes available with this code:

When there’s nothing to read, we now get an exception. Use this try-catch in Update to ignore it:

The motion should now be wonderfully smooth.

It’s common to control a player by directly setting the velocity of its Rigidbody2D. We are, after all, used to players not fully conforming to the laws of physics. But we expect more realistic behavior out of other kinds of objects. Let’s look at how the player can fire off projectiles.

We need a fire button. The joystick has a builtin button. Complete these steps to incorporate it into your controller:

In a game with rapid fire projectiles, we might want to know if the button is currently down.

Back in Unity, we respond to a button press by creating a brand new game object and launching it with some force. Complete these steps to the projectiles flying.

That’s it. You’ve now seen two ways of using rigidbody physics to add some life to your game.