This is my post for feature 2 of the project, terrain generation.  Since I felt like I didn’t fully grasp the diamond-square algorithm the first time that I watched the video, I watched the video again and re-implemented the algorithm in Python.  As far as the algorithm itself goes, I didn’t use any other help than the video that Chris posted.  For help with Python, I used both the docs at http://www.python.org/doc/ and http://www.stackoverflow.com.

I ran into a few problems while coding up the diamond square algorithm.  I haven’t used Python in a while, so I had some basic syntax issues to work through.  Also, I had an issue where my terrain was much too bumpy, which I eventually figured out was due to my max value for the random number generator not decaying properly.  The only other “tricky” thing that I had to work out was how to switch the grid plane of the terrain from x-y to x-z, which was as simple as flipping the coordinates before outputting the coordinates to the generated file. 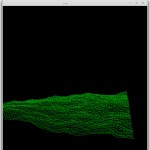 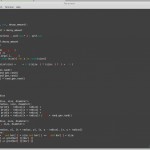