This feature was all about using textures to modify the base albedo of the terrain in my scene. The steps to do this are not really any different than texturing any other model. I needed to upload the texture that I wanted to use, and create a new shader that would take advantage of the uploaded texture.  I didn’t need to use any outside resources for this feature, except the fantastic videos that Chris provided for us.

I am doing a “space” theme for my scene, so I went online and found a fitting planet surface texture to use.  The code used to upload the texture isn’t anything we haven’t seen before, and the shader is pretty basic as well.

However, once I got my texture uploaded for the first time, it looked pretty “static-y” while I moved around my scene.  To fix this, I rewatched the Mipmapping video and used the built-in glut mipmapping ability. 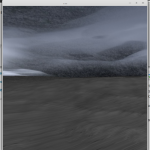 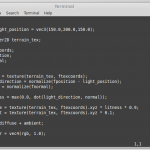