Your objective in this homework is to acquaint yourself with the world of mathematical calculation using a programming language. Math in code is a little different than the calculator math you are used to in the following ways:

You will encounter these differences as you solve the following four problems of calculation.

Complete the four classes described below. Place all classes in package hw1. Note that some requirements are about your program’s output, while others are about the code you write to achieve the output.

Class Capsule helps the user calculate the area of a capsule. Its main method asks the user for the length of the capsule’s bounding rectangle and the diameter of its circular caps, as shown in the following figure:

It prints out the area to 4 decimal places. Match the output format shown in this example exactly—even the whitespace:

Read from System.in and write to System.out. Assume the user enters two double values. If users enter unreasonable values (like a negative diameter or length "furniture"), do nothing special. For now, let the program crash or compute strange results.

Class Crank helps the user determine what number will be reach when a dial is turned a specified number of ticks. Imagine the dial shown in the following figure:

Imagine this virtual dial, on which we pretend that the higher numbers are written on rings outside the actual dial, like this:

Prompt the user to enter the start and end numbers of the real dial, the number from which the cranking starts, and the number of ticks to turn. Print the number we turn to. Match the output format shown in this example exactly—even the whitespace:

Handle I/O as you did for Capsule.

Contrast this to a right or clockwise turn:

The journey begins at (x1, y1) and ends at (x3, y3). If the bend at (x2, y2) turns counterclockwise, print 1. If clockwise, print -1. If the three points are collinear, forming a straight line or bending 180 degrees, print 0. Match the output format shown in this example exactly—even the whitespace:

How on earth does one determine the direction of the bend? Use this non-obvious formula for computing the signed area of the three points:

The area is positive for a counterclockwise turn, negative for clockwise, and 0 for collinear points. The magnitude of the number will vary. Search the Math class documentation for a way to turn a number of arbitrary magnitude into 1, 0, or -1.

Handle I/O as you did for Capsule. Assume that the numbers the user enters are doubles.

In your mathematics education, you’ve spent a lot of time learning about functions, which map independent x to dependent y. Because they associate each value of x with a single value of y, functions are unable to express graphs that backtrack along the x-axis, like this one that looks a bit like a uvula: 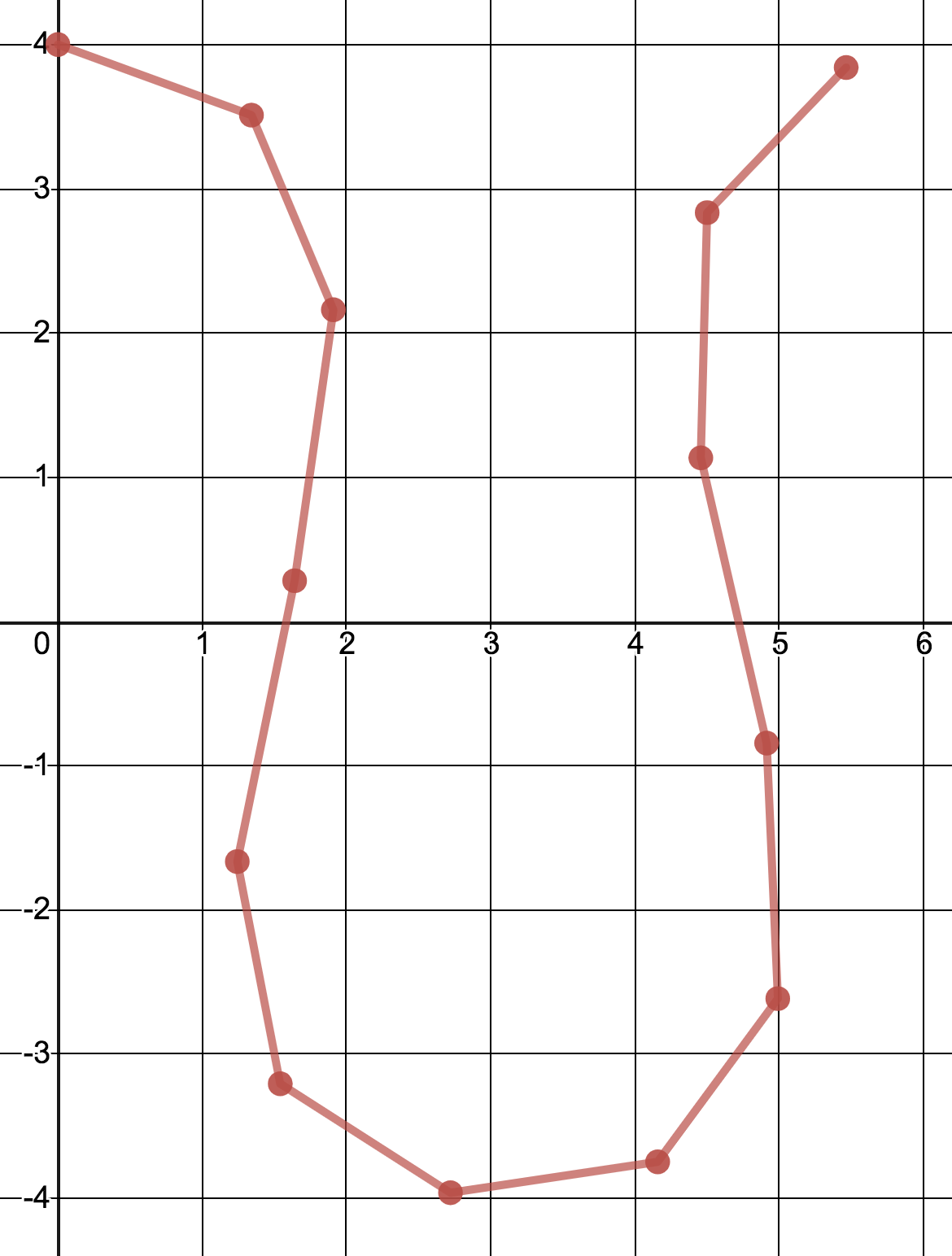 The term scale is another independent variable that adjusts the width of the uvula.

The main method of class Uvula prompts the user for a scale and displays the coordinates of a uvula by sampling the parametric equations described above for integer values of t in [0, 12]. Match the output format shown in this example exactly—even the whitespace:

Handle I/O as you did for Capsule. Print each coordinate to 2 decimal places. Test your solution by pasting the output coordinates directly into Desmos.

To check your work and submit it for grading:

A passing SpecChecker does not guarantee you credit. Your grade is conditioned on a few things: