First order of business: switch partners. Choose a partner that you haven’t worked with yet.

Our previous instrument played multiple notes—a chord—all at the same time. Today we’ll make an instrument that plays a chord’s notes from lowest to highest in quick succession. Such sequences are called arpeggios. The arp- stem of arpeggio refers to the instrument we know as the harp, which is often played by plucking strings in ascending and descending sequences. An instrument that plays arpeggios is sometimes called an arpeggiator, so that’s what we’ll call our instrument.

The arpeggiator will have three controls: a dial for picking the arpeggio’s root, a dial for setting the tempo, and a dial for choosing which sequence from the root to play. Build a circuit like this using three potentiometers: 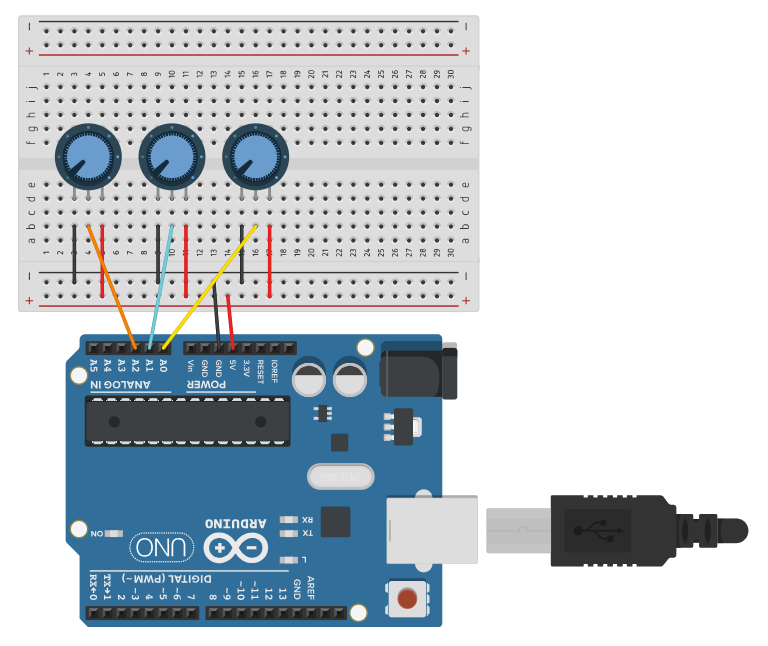 Recall from the tiangle that a potentiometer has three pins. Electrons come in from ground on one side and slip out the opposite side to 5V. The middle pin effectively reports how many electrons are slipping through. Cranking the potentiometer restricts or expands the flow.

Before diving into the instrument, it’s a good idea to ensure that the hardware is assembled correctly with the smallest functional program. Follow these steps to see if the potentiometers can be read from:

Upload your code. You should see triplets of numbers emitted in the Serial Monitor.