U and I: Tom Statz

The purpose of this app is to get your current coordinates using the phone’s GPS.   The app can calculate a compass bearing to a set of coordinates that the user gives it.  A compass can be opened as a second activity.  In making this app I used a total of eight Textbox’s, two EditText’s (will only let the user input numerical values, negatives, and decimals),  and three Button’s. I also thought to include  analog and a digital clocks.  I won’t claim to have written the compass or the class I used to get the GPS working as they were pretty complicated and I thought they were a bit out of scope of the goals of this assignment. I did do some of the math associated with calculating the the angles and the bearing. This was my first real attempt at an android app outside of class so I learned quite a bit about handlers, resources, and xml layouts.   I look forward to implementing what I learned writing this app into a more featured application. Oh, and this app has support for Spanish as well.

(Note: The button to open the compass on the bottom appears cut off on these screenshots of the emulator, but it appears correctly on my phone.) 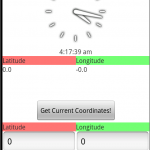 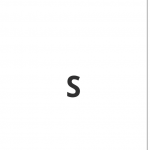 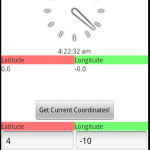