Hi, I’m Chris and I teach people to teach machines. But I am a reluctant computer scientist. Sometimes I get concerned that the thing I know the most about is not directly linked to my survival. My father knew how to keep machines running. My wife grows vegetables. In a post-apocalyptic world, they would be valuable. I would not be.

A few weeks ago, my wife asked me if I thought our sons would study computer science. I told her that I hoped to teach them enough of it at home that they’d be freed up to study something else.

I really do like my discipline, but I love more the things that my children, my students, and I can make with it. The past few years, I have been searching for ways to make computer science less virtual and more physical, more integrated in the world around us. Our agenda for today is to demonstrate three projects that support my mission of making computer science less virtual.

Schools left and right, politically and geographically, are establishing makerspaces, buying up 3D printers and laser cutters, and getting their students designing and building real things. The students are making. This sounds great. However, if you talk to the teachers and librarians who are staffing these makerspaces, you will hear about the many kids who are just downloading other people’s 3D models and design files from Thingiverse and fabricating those.

This happens for a couple of reasons. First, its part of the maker ethos to share what one has made. Second, learning to model in 2D and 3D is time-consuming and doesn’t really fit well into an already crowded school curricula. I think computer science can fix this. Instead of just plain making, we need computational making.

Let’s now look at some tools I’ve been building to facilitate computational making.

The first tool is Madeup, a programming language for making things up—literally. It is very much modeled after the drawing mechanics of Seymour Papert’s Logo from the 1980s, but extended to three dimensions. Madeup, like Logo, is meant to make learning geometry an interactive experience. Instead of imposing a grand coordinate system over all space, the programmer uses a coordinate system relative to the avatar on the screen. Logo’s avatar was a turtle, and Papert called this way of thinking about space turtle geometry. Let’s see it at work in an example. We’ll code a rupee from the Legend of Zelda games.

For those of you who have been spending your time elsewhere, rupees look like this: 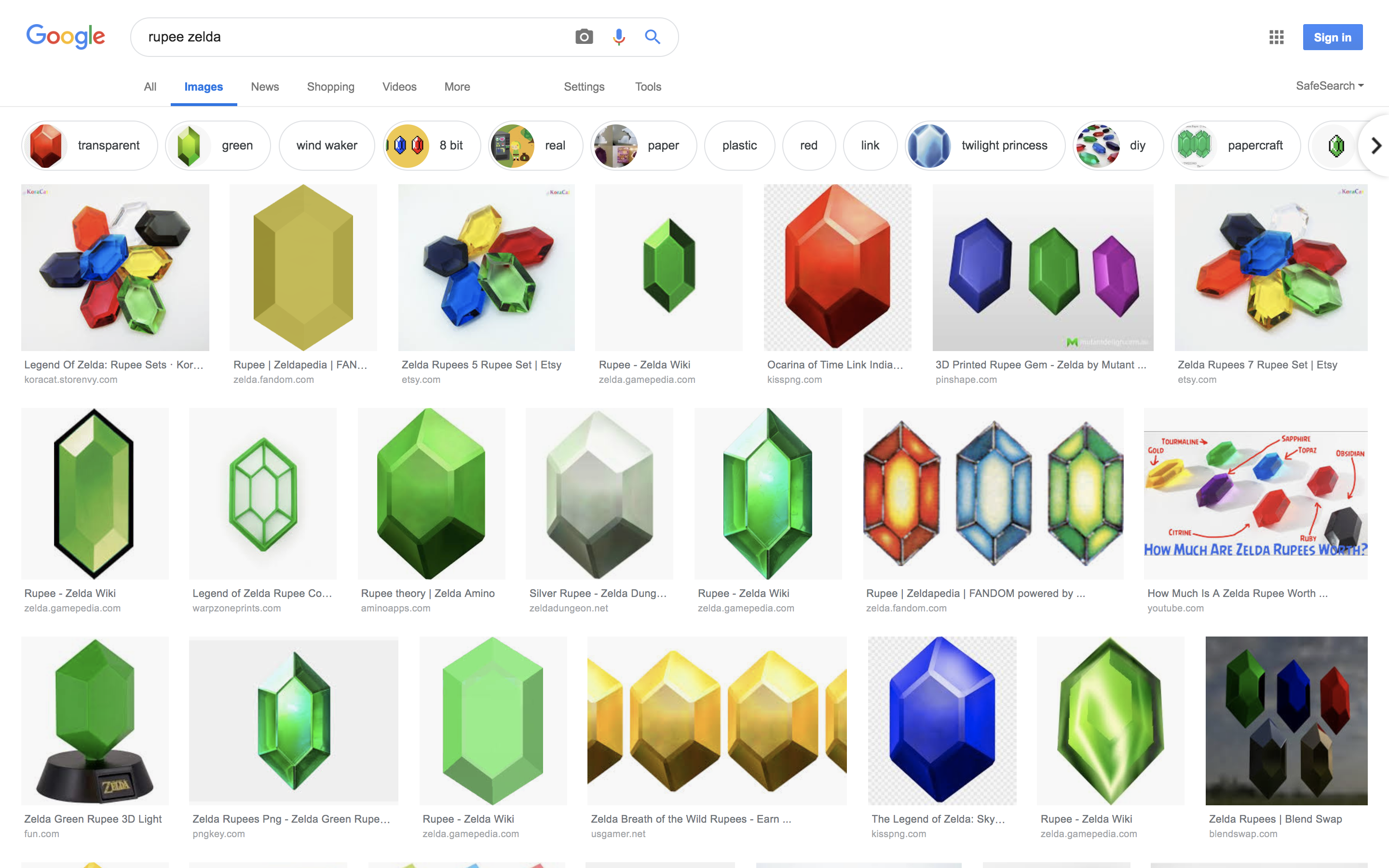 We will program the cross section of one of these. Imagine that we cut one right down the middle. What shape would we see? An elongated hexagon. Let’s write Madeup code to trace out the top half of the hexagon, like so:

Next we revolve that cross section around the x-axis, sampling the surface or revolution just six times to produce the hexagonal structure:

And finally we stretch it a bit vertically:

What if want to make a sharper bevel? We must change the angle we turn. Instead of 45, let’s try 30:

Whoops. We’ll need to change the peak angle too. But to what? Some experimentation leads us to 120:

But we can do better than experiment. Why is it 120? Because all told, we are turning back the direction we came, which is 180 degrees. We burn 30 of those up on the first yaw and 30 on the third yaw. That leaves 120 left for the middle yaw. Now we can generalize this and turn the angle into a parameter:

Madeup is a fully-featured programming language. It supports conditionals, loops, variables, functions, and arrays. There are many ways to turn a path into a solid. We’ve seen revolve, but there’s also dowel. Let’s make a chain link:

This perimeter of this gear is extruded and a hole is subtracted from its center:

The Madeup editor also supports a blocks programming interface, and one can (mostly) switch back and forth between text and blocks.

How does Madeup make computer science less virtual? The model can be printed on a 3D printer or embedded in a game engine.

I spent the last year

The second project I’d like to share you has one less than dimension than Madeup. Twoville’s purpose is to help programmers build 2D scalable vector graphics (SVG) files that can be fed into a laser or vinyl cutter.

Let’s make another jewel, a diamond. Since we’re in 2D, we’ll just create the profile of a diamond. We start with a square, but rotate it a bit:

Twoville tends to be a very declarative language, as we’re often just setting properties. To ease the syntactic burden of setting a sequence of properties, I added in the scoping function with:

We want to chop off the top, so we overlay another rectangle across it:

To remove the red rectangle, we create a cutout object that serves as a mask:

A similar approach can be used to make a phone:

Like Madeup, Twoville supports conditionals, loops, functions, and arrays. I used functions to abstract out the droplet shapes of this logo that I walked by everyday in Brisbane, Australia, during the first half of my sabbatical: 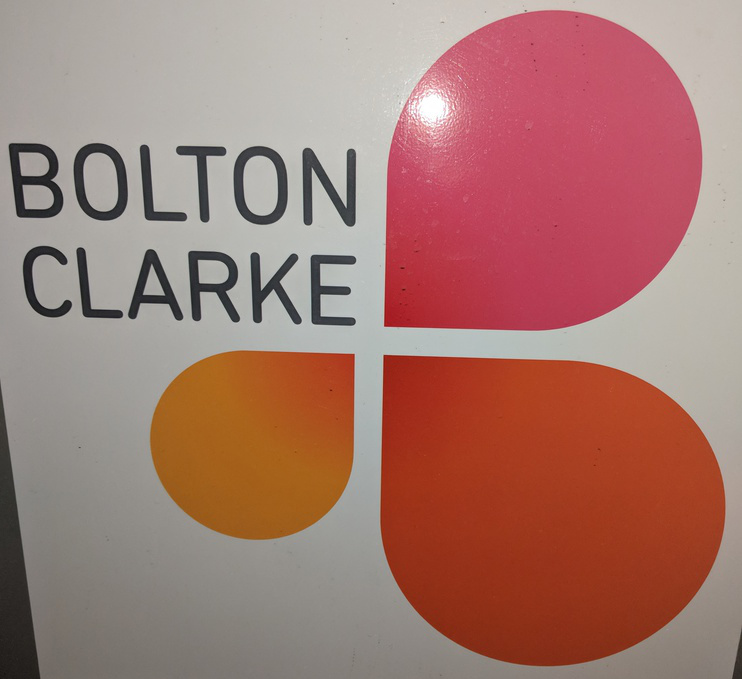 If you’ve done anything with 3D printing in schools, you will have encountered the slowness of the technology. Models take a long time to print, and the machines need minding. 3D printing doesn’t scale well to large groups of students. Vinyl and laser cutters are much faster, and I think Twoville will better accommodate the time-limited summer camps and workshops I’ve been putting on back home.

The last project I’d like to share has a less touchable output. It also has one less dimension than Twoville. I’m losing dimensions as I get older. It must be a case of “dimentia.” Deltaphone is my exploration of applying the idea of turtle geometry to music. Instead of thinking about music as a sequence of absolute positions on the staff, we think of a song in Deltaphone as a sequence of changes or deltas between one note and the next.

Let’s compose a little song to see how it works.

Deltaphone supports variables, conditionals, loops, and functions. The output of Deltaphone is a score.

This project is only a few months old, and I don’t know if it has a future or not. I need to find a music teacher who doesn’t feel threatened by technology and who can help me shape it into a tool to explore music theory and composition.

These are three projects that I have been developing to make computer science less virtual, to fit it into the everyday worlds of objects and music.