Today we take a foray into a technical topic: the mechanics of calling functions. We might think this is information that is pretty well hidden from us when we’re writing in a high-level language. But abstractions leak. The way that functions are called bubbles up into the design of our languages. Having some awareness of what’s happening under the hood will help you write safe and faster code and will help you empathize with the designers of a language.

Your mind is consumed by the latest programming assignment. Then someone rings your doorbell. You panic. Dirty laundry carpets the floor. Dirty dishes fill the sink and counter. Your roommate’s pizza crusts have been squirreled away in random places. Immediately you begin stashing things away and switching over your mind to accommodate this new activity of having company over. The exact same thing happens when you call a function. Let’s talk about the mad scramble that accompanies a function call using the ubiquitous C calling conventions.

Technically, the stack grows downward, with its top at the bottom. A called function will get its own state below the caller’s on the stack. That state is called a stack frame or activation record.

Two registers are used to indicate the extent of a function’s stack frame. Register %ebp is the base pointer or frame pointer. It points at the start of the function’s memory. Your book calls it the environment pointer (EP). This pointer is fixed in place during the function’s execution. The register %esp points at the last allocated memory cell of the stack. It will grow and shrink as the function allocates or deallocates stack memory. We change %esp either directly with a subl $NBYTES, %esp instruction or indirectly via pushl RVALUE or popl LVALUE instructions.

Let’s see what happens when a call to a 0-arity function is encountered. Consider this C code:

We compile this down to assembly, not machine code, to see what the machine does to implement the function call. This invocation of gcc will produce the assembly:

And here’s a portion of the assembly that results:

What do you notice about this code, apart from the many Ls in calll?

One thing that you can’t tell from this code is that the calll instruction implicitly does something like this:

The return address is pushed onto the stack so the CPU can navigate back to the caller when rand finishes. Sometimes malicious programs will take advantage of this and try to write a different address into the stack, one that leads to code the malicious program has inserted somewhere else in memory. Register %eip is the instruction pointer or program counter. We can’t write to it it directly in x86. Instead we use call or jmp.

Here’s the code in its fuller context:

The subl instruction allocates 8 bytes of space on the stack. But there are no local variables. What gives? Well, on some machines, there’s an expectation that stack frames must be aligned on addresses that are multiples of 16. A couple of things have already happened prior to this code that messed up that alignment. Before f was called, the 4-byte return address of the caller was pushed. Then the 4-byte %ebp was pushed in the prologue. That moved us to an 8-byte alignment. The compiler inserts an additional and otherwise useless 8 bytes of space so that the stack frame for rand is aligned to a 16-byte address.

At the end, we add 8 bytes back on to the stack pointer. This effectly frees the stack memory. There’s no wiping the data. The values are still there, available for inspection by malicious code.

We’ve seen how a function’s return value is managed. Let’s consider this call to a function with parameters:

Actually, it’s not quite the assembly that I get. Even with no optimizations, gcc will add the 5 and 10 together automatically and not generate the addl instruction. I inserted it manually. These several things are observed in this code:

The compiler might translate this function into this assembly:

We can make the following observations about how local data is accessed:

In summary, the following steps happen on a function call:

There’s a step we have not discussed. Only so many registers available, and functions will have to coordinate how they change them so they don’t clobber each other’s state. In x86, the convention is that a function is free to modify %eax, %ecx, or %edx, because the caller has preserved its copies on the stack before the call. If the function needs to use other registers, it must push the caller’s values of these registers on the stack and then restore them as the function’s finish. Preserving registers on the stack like this is sometimes called spilling.

All of the discussion above is focused on C and x86. C takes a very simple view of functions: they are all defined at the top-level. Many languages allow functions to nest. If an inner function references variables from an outer function, we must have a scheme for accessing another function’s stack frame.

At runtime, every time a function is called, a static link is inserted in the called function’s stack frame. The static link points to the stack frame of the called function’s outer function—which is not generally the same as the caller. When a free variable is referenced, the chain offset is used to traverse up these static links (the static chain). Then the local offset is used to find the outer function’s variable. The code to do this traversing is all generated at compile time, so the lookups aren’t as slow as they might be.

Recall that if we look for free variables in the caller rather than in the surrounding scope, we have dynamic scoping. One might implement this flavor of scoping by walking up the dynamic links (the caller’s base pointer) until one encounters a stack frame that has a declaration for the referenced variable. This scheme is called deep access. Since a function’s caller is only known at runtime, the compiler can’t automatically generate code to walk up the dynamic chain. Deep access is slow.

An alternative that allows faster lookup is to maintain a stack for each active variable name in the program. When a function accesses foo, the value is pulled installed off the top of the stack for foo. No traversal of the dynamic chain is necessary. However, when the function returns, the stacks for all of its local variables must be popped.

To be perfectly honest, I don’t know why we still talk about dynamic scoping. One of its benefits is that we can effectively pass data to functions without using parameters, but even this is not a clear benefit.

To illustrate how these scope lookups might be implemented, let’s work through a couple of exercises and draw the changing stack. 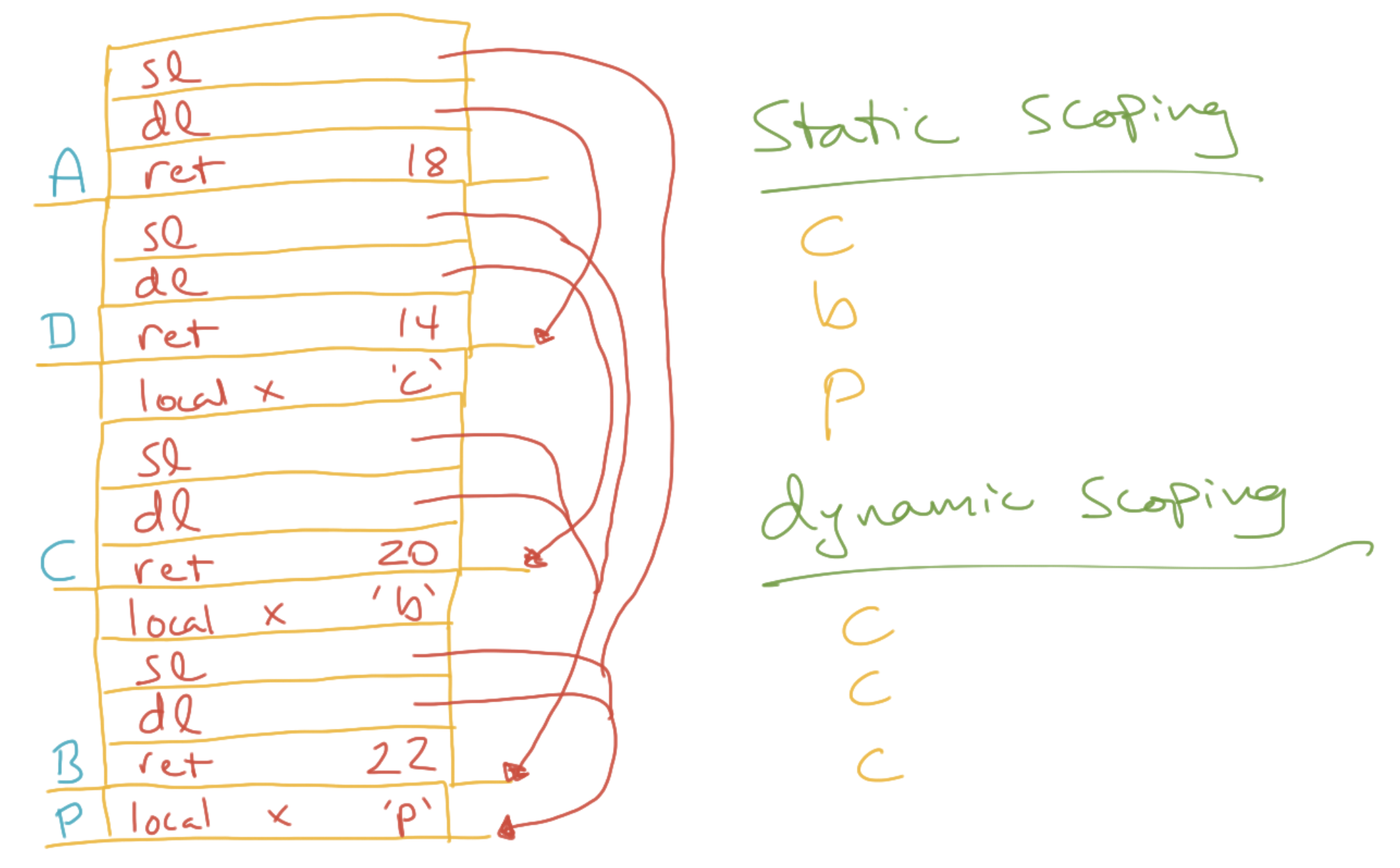 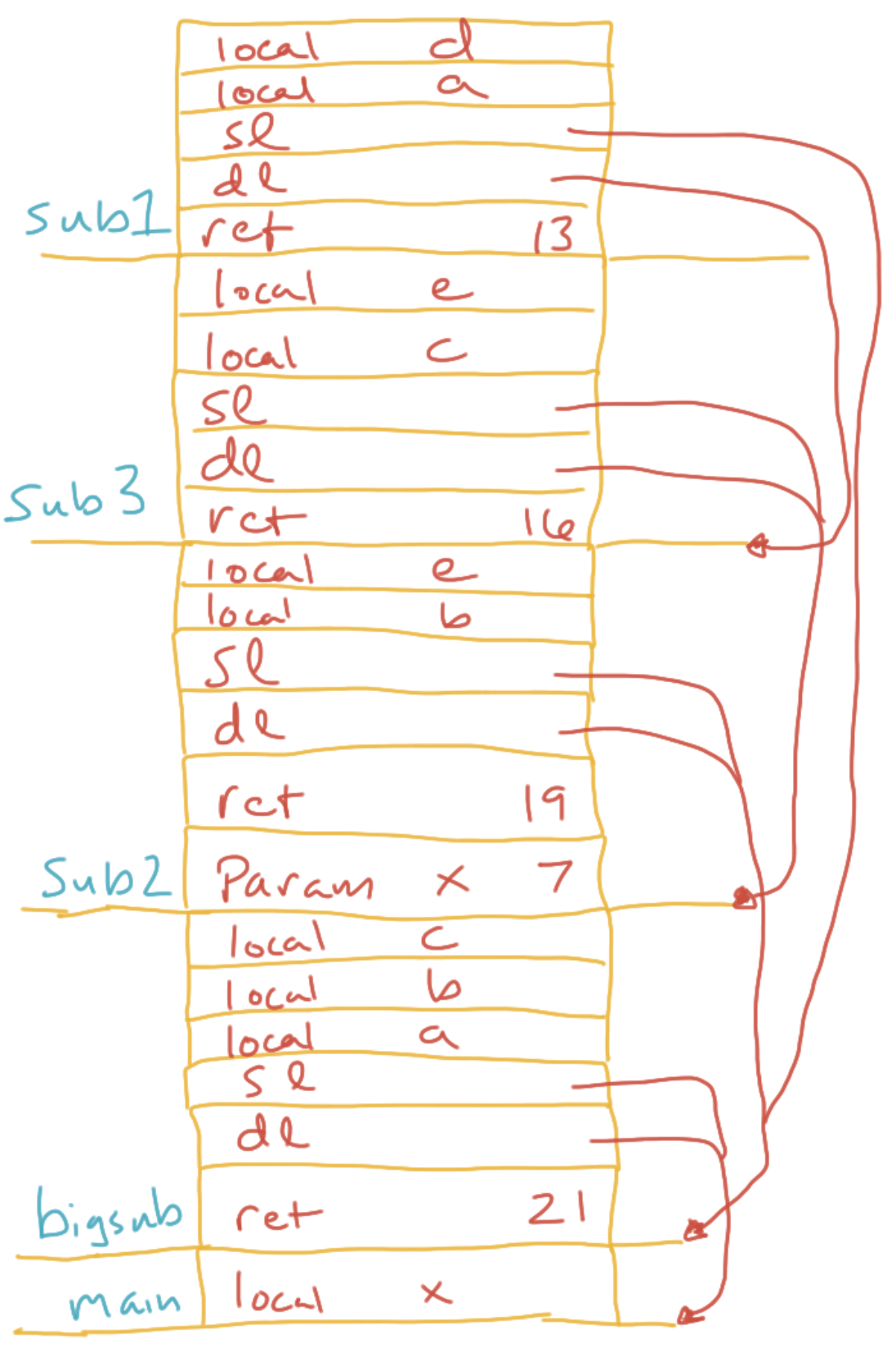