Computer scientists spend considerable time tinkering under the hood of their systems. Their clients, however, are happy to only have a few buttons to push to make those systems work. A simpler view of a complex system is called an abstraction. When a humane abstraction is available, clients can ignore irrelevant and low-level details and focus on the features that matter to their task. Today we examine forms of abstraction that organize and simplify our code for the benefit of our clients.

Some features of our languages are meant to help organize our code. Let’s call such a feature a grouping abstraction. Examples include packages, namespaces, static classes, and modules. A grouping abstraction gathers together types, data, and subprograms related to a theme. If we don’t need any of a group’s entities, we can ignore it.

Most of our discussion will be centered around data abstraction, but some of the ideas we hit upon will apply to the other forms as well.

Computer scientists have a toolbox of useful data abstractions called abstract data types (ADTs). These include lists, stacks, sets, maps, and even floating point numbers. An ADT defines a set of values and the operations that it supports, but no mention is made of its representation or how its operations are implemented.

Many of our languages allow us to define our own data types and advertise their interfaces as ADTs. Let’s discuss a few features our languages provide to help us form ADTs.

The grouping together of related code and data is called encapsulation. Some groupings are based on syntactic structures. Examples include namespaces in C++ and C#, packages in Java, modules in Ruby and JavaScript. Classes, interfaces, structs are also grouping mechanisms. Other groupings are based on files. Examples include C header files and ad hoc modules based only on the file system.

Encapsulation offers several advantages across the design space of our languages:

Keeping an object’s state private should be our default behavior. If the client has direct access to the state, the client may put our object into a situation that should not be legal.

For example, consider this Vector2 class:

If the client reaches in and modifies x, the length property may no longer be accurate. JavaScript doesn’t give us many tools for hiding information. Ruby forces all instance variables to be private. Other languages allow us to mark individual items as public, private, or protected.

To test the soundness of a taxonomy, we should fit the systems with which we’re familiar into it.

The Charade of Classes

Did you know that in the early days of C++, it was just a thin veneer over C? Classes were just syntactic sugar. We might have had a class that looked like this:

This code would get compiled down to C, where classes weren’t a thing. But C does have structs, so Hero would get turned into one of those:

What about the methods of Hero? They’d get turned into regular C functions:

Notice how the invoking object became the first parameter. But it wasn’t called hero. It was called this:

When the compiler uses the compile-time type to figure out what method to call and wires the call into machine code, that’s called static dispatch.

What happened when we instantiated an object, like this?

Those two lines in main were particularly dear to Bjarne Stroustrup, the inventor of C++. In C, it was very easy to allocate space for an instance of a data structure but then forget to initialize it. Stroustrup believed that allocation and initialization should not be separate steps, that “resource acquisition is initialization” (RAII). Many other languages adopted a similar approach. To construct an object is to be allocate memory for it and assign the object’s initial state.

Eventually, C++ became distinct enough that Stroustrup developed a compiler that took C++ directly to machine code. One of the features of C++ that warranted a custom compiler was subtype polymorphism. For subtype polymorphism to work in languages like Java and C++, we need to figure out what version of a method to call. In a polymorphic setting, we don’t exactly know what the type of the object is until runtime, so we call the process of figuring out the method dynamic dispatch.

Computer graphics pioneer Jim Blinn wrote a column in 1990s when C++ was gaining in popularity, and he dismissed polymorphism, saying he’d been doing something like it in Fortran for the longest time. Here’s his polymorphism in Fortran: 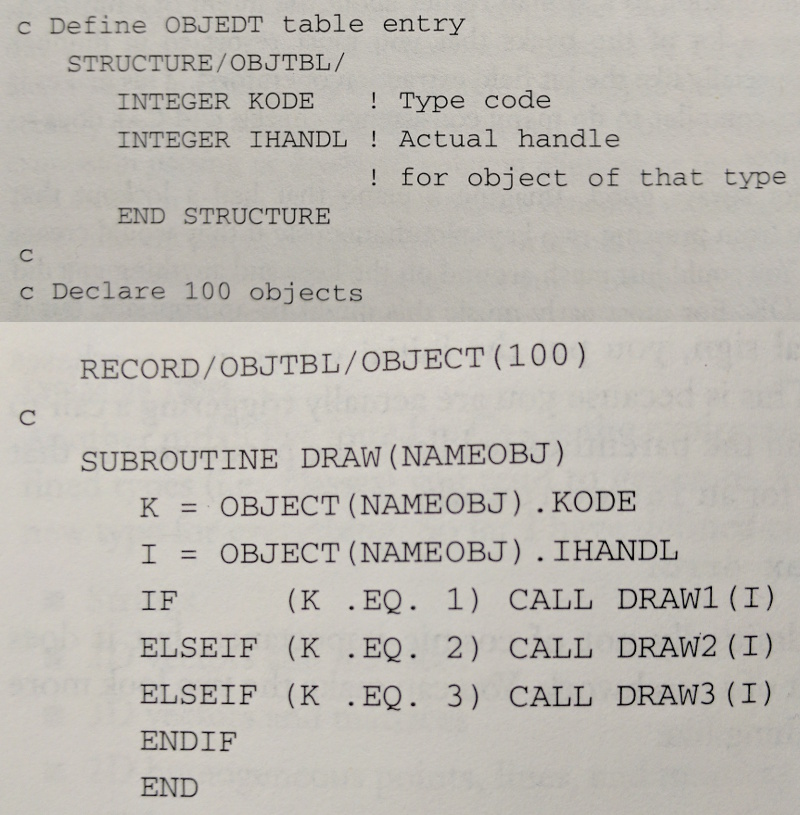 Structure OBJTBL is a pair of a type tag and a pointer. Subroutine DRAW is the polymorphic conductor code. It walks through a conditional ladder, inspects the type tag, and dispatches accordingly.

If this was how dynamic dispatch was implemented today, its designer would have been eaten alive on Reddit and Stack Overflow. Why? For one, the conductor code is full of conditional statements. We saw in computer architecture that conditional statements thwart pipelining. For two, every time we add a new type to our hierarchy, we have to go back to the conductor code and update it. We’d really like to avoid touching code once it’s working. We tend to mess stuff up. There’s that saying, “separate that which changes from that which doesn’t.” Thankfully, dynamic dispatch is implemented differently.

Let’s look at the memory footprint of some C++ classes. We’ll start with an int wrapper:

Let’s compile this and inspect a with the debugger. Here’s the g++/lldb magic that makes that possible:

What’s the endianness of my machine?

What happens when we add some more state? Like an array of characters:

The char[] is padded so that a has a word-aligned address.

Class A hasn’t changed. But let’s inspect our instance of B:

This output tells us that the first bytes of a B instance are its A foundation. We also see the wild bytes of the float that come after.

Notice that no space in these objects is reserved for code. Code doesn’t live in the object; it is shared across all objects and lives in the text segment of the process’s memory space. We package code and data together in an object-oriented programming language, but the code and data are separated within the memory of the machine.

What do you suppose happens if we have this assignment?

You’re right. The extra bytes of b get chopped off. This is called object slicing.

What effect does this have on a and b? Let’s check:

The objects are bigger. Both have 8 new bytes at their beginning. That, my friends, is a pointer to each class’s virtual table or vtable, the vehicle by which fast dynamic dispatch happens. Object b also gets an extra 4 bytes at the end. I believe this is used to ensure that the vtable pointers are aligned to 8-byte boundaries when we have a sequence of B instances back to back, as in an array or struct.

Let’s examine a class hierarchy (courtesy of Stroustrup) and see how these virtual tables are laid out:

Method i gets no entry, because it is not virtual.

Class B overrides g and adds m. Its other entries just point to the versions from A.

These vtables are stored once per class—they’re static. Each instance of A, B, or C has an implicit instance variable pointing to its class’ vtable. We’ll call that member vptr. An instance of A is laid out like this in memory:

An instance of B is laid out like this in memory:

An instance of C is laid out like this in memory: 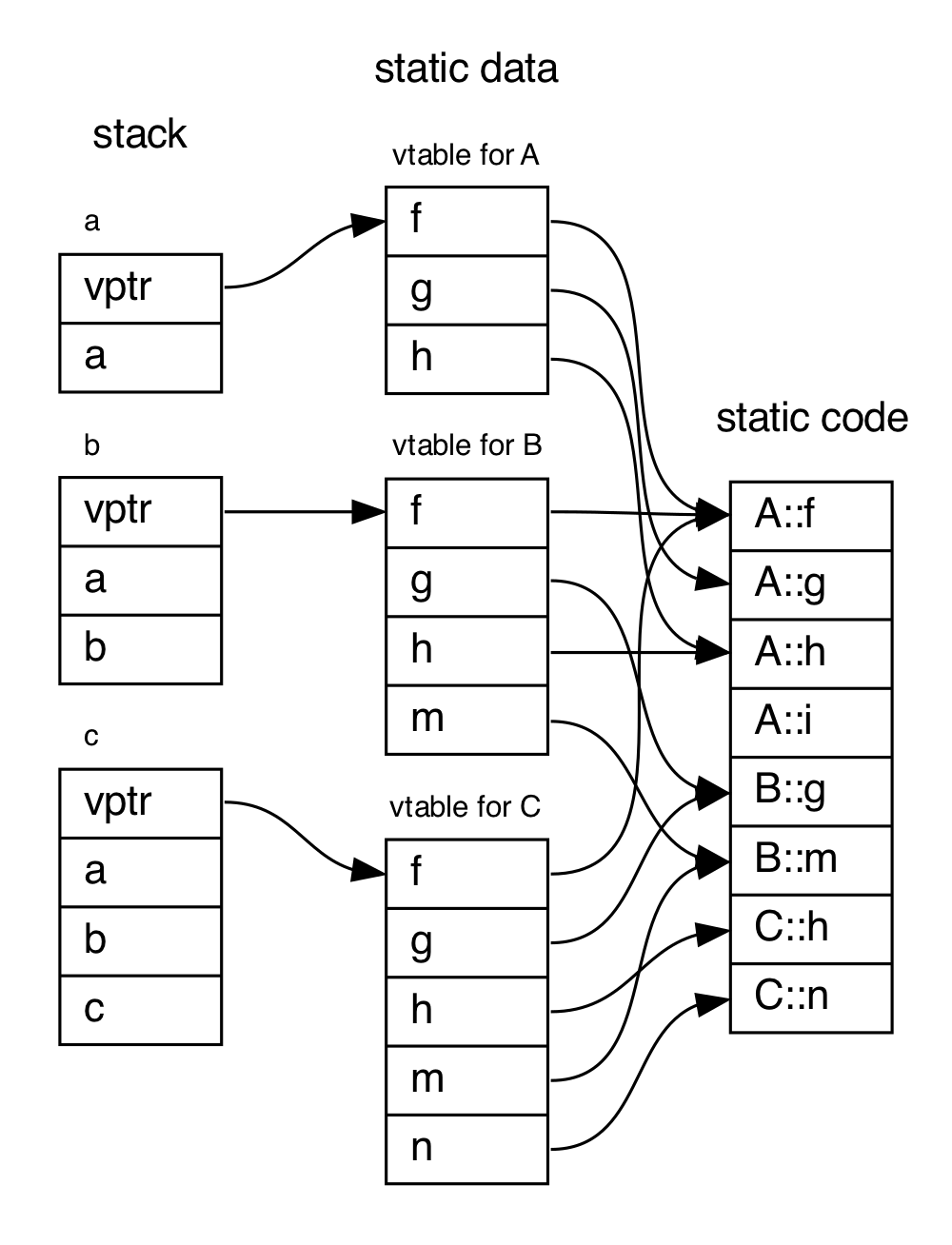 Now, suppose we have a piece of conductor code that takes in a pointer to A, but under the hood the object is an instance of C:

What exactly has to happen here to get the right code running?

Under the hood, this invocation turns into a crazy indirect memory lookup. We get a function pointer from the vtable pointed to by the object and call it:

So, subtype polymorphism is made fast at runtime through a table lookup. No conditionals are needed. Is this indirection free? No, because there are memory reads. Will these memory reads be fast? The vtables will likely be stored in cache if they are frequently accessed. They are small and there’s only one per class. The object is also likely to be in cache if we’re operating on it.

C++ isn’t the only language to use vtables. Consider this statement from the Java Virtual Machine specification:

The Java Virtual Machine does not mandate any particular internal structure for objects.

In some of Oracle’s implementations of the Java Virtual Machine, a reference to a class instance is a pointer to a handle that is itself a pair of pointers: one to a table containing the methods of the object and a pointer to the Class object that represents the type of the object, and the other to the memory allocated from the heap for the object data.

Many of our object-oriented languages only allow a class to have one superclass. With only one superclass, the structure of the subclass is easy to determine: just tack its state after the superclass state in the class instance record.

What if both superclasses themselves have a common superclass? Your inheritance structure will look something like this:

What we want is this:

This is called the dreaded diamond pattern, and C++ is one of the few languages that allows you to achieve it. You unite the shared base object by using virtual inheritance:

The compiler expects the subclass to manually steer the construction of the superclasses.

Another way we abstract data is by writing one structure that serves many types. Here’s how we might make a 2-tuple in C++ using templates:

The C++ compiler will generate a new version of this class for every type combination that it encounters. There’s no mechanism for compiling the class ahead of time. It needs to stay in its source form if others are to be able to access it.

The Java folks decided to take a different approach, one that didn’t sprinkle so many similar versions of the templated structures. Here’s our 2-tuple written using Java generics:

Java piggybacks on subtype polymorphism to implement parametric polymorphism. This means that only classes can be type parameters. We can’t have a Pair<int, boolean>, for example. But we can have Pair<Integer, Boolean>.

The book sneaks in a discussion of reflection, though it doesn’t really fit in with the other topics we’ve looked at today. Reflection is the ability for code to ask questions about itself. One can ask a method with its parameters are, what exceptions it throws, and how visible it is. One can ask a class what its instance variables and methods are. Reflection allows us to do some interesting things, like run unit test runner. Here we ask the class for all its methods that start with the string "test" and automatically run them:

Who moves the clock’s hands?
It does, thank goodness it does
I don’t have the time